How to Have Energy Efficient A/C

Types of Room Air Conditioners
Air conditioners that are not large enough to cool an entire house are
commonly called “room air conditioners”. There are basically two types: conventional room air conditioners, which use the “refrigeration cycle” to generate cool air and the much less common “evaporative coolers”. These use a completely different technology, which is explained below.

In the section below, Energy Saving Tips for Buying and Using Room Air Conditioners, almost all of the measures apply to both types of air conditioners. In the refrigeration cycle, refrigerant is pumped through an evaporator coil where it expands to become cold. Air is blown past the evaporator coil while it is cold to become cool, and then enters the home. The refrigerant is pumped from the evaporator coil to the condenser coil, where it is compressed. This makes it hot. Air is blown past it to the outdoors, cooling it down. 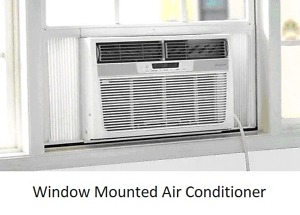 Portable air conditioners rest on the 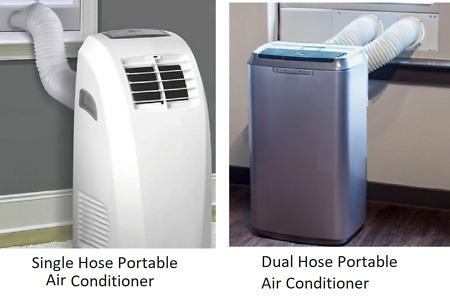 floor next to a window, on wheels or casters. They are much less energy efficient than window air conditioners, but have the advantage that you can move them to the room you are in. However, you will need to use a long, heavy gage extension cord if any of the rooms do not have enough extra electric capacity.

Single hose models produce less cool air for the same electricity used. When they blow out the air, the air pressure in the room becomes lower. This draws in warm air, mainly through gaps around doors.

Dual hose models draw in outside air through the second hose, so the room’s air pressure remains the same.

Portable air conditioners have the disadvantage that they collect water, which must be emptied each day. 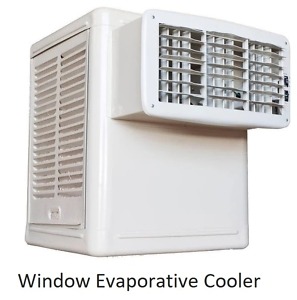 Window evaporative coolers cool the air that passes through them by allowing water contained in them to evaporate into the air. They are only effective if the climate is very dry, because only dry air absorbs enough water to significantly lower the temperature of air passing through it. Their effectiveness varies from day to day based on the outdoor relative humidity. They use about one-fourth as much electricity as conventional units.

In the climates where they are commonly used, they can lower the temperature of the air passing through them by as much as 20º. They are only effective in dry climates because only dry air can absorb much water. There are units that are mounted to the wall of the house behind a window with a box similar in size to a window air conditioner sitting on the window sill.

The picture shows one of these units. The box in front is mounted in the window opening and the remaining part is mounted outside of the house. These would be difficult for most homeowners to mount, and a water feed tube must be connected to a house water pipe. There are also portable units which sit on the floor next to a window, requiring no installation. With these you pour in the water. They are much less effective and energy efficient.

Ductless split system air conditioners use the refrigeration cycle and can be installed to cool more than one room, by each room having a separate evaporator (the unit containing the cooling coil). These air conditioning systems have a condenser that rests on the ground outside of the house and a small evaporator mounted to the wall, normally near the top of the wall.

They are more energy efficient A/C than room air conditioners because their condensers release the heat more effectively. A 3” diameter hole must be cut through the wall behind the evaporator for the refrigerant tubes and their insulation. This type of air conditioner is more expensive to buy and operate than any type of room air conditioner if only one room is cooled, but a condenser can be used with up to four evaporators, cooling four rooms, and can be less expensive than the other types if two or more rooms are cooled. They are sold and installed only by heating and air conditioning contractors.

nnnnnnnnnnnnnnn
Buy air conditioners with many energy saving features, such as:

Before buying a room air conditioner you must check if the electric circuit it would be using has enough extra amperage capacity. A rule of thumb is to buy an air conditioner which draws no more than 50% of the circuit’s amperage capacity, but if a circuit is used only for lights and appliances such a radios, which draw very low amperage, you may be able to use more than 50% of the circuit’s capacity.

First, check if the circuit you want to use is a 15 or 20 amp circuit. This will be written on the circuit breaker switch or the fuse (the higher-amperage circuits are not for 115-volt wall outlets). To check how much amperage a circuit is using, turn off its circuit breaker or remove its fuse and check which outlets and lights go off. They should be near each other, but occasionally an outlet or ceiling light in the basement is on the circuit. If an extension cord must be used, it must be a 15-amp (14 AWG) cord. These may be called, “appliance cords”. A lower amperage extension cord is a serious fire hazard.

nnnnnnnnnnnnnnnnnnn
Energy Saving Tips for Using Central Air Conditioning
nnnnnnnnnnnnnnnnnnnnn
If you take measures to reduce your use of central air conditioning, you will cut your electricity costs and also reduce the high costs of equipment repair and replacement. A condenser may last only 12 years if used often, and is usually over $2000 to replace. If on the roof, a crane must be used to replace it.

How to Build a Roof Over a Condenser Unit

How to Build a Roof Over a Through-the-Wall Air Conditioner:

You can enjoy having energy efficient A/C if you do many of the small things explained above.